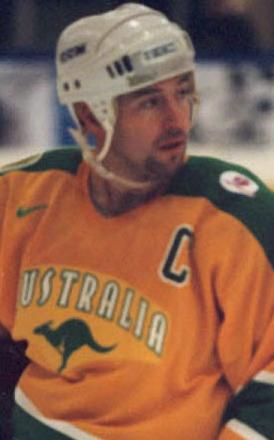 - How have you been in contact with Australian ice hockey for the first time ?

Originally I was going to go to Australia for a holiday. I then found out through a friend that there was ice hockey in Australia. I wrote to the ice hockey federation for more information, they sent me an over-seas player form which gets sent out to all the clubs. A club called the Macquarie Bears (who are now the Sydney Bears) contacted me and brought me down to Australia from Canada in 1982. For three years I played the season in Australia and returned then to North America to play there. I then decided to stay in Australia. I played with them until 1989 and then moved to Adelaide.

I played all my minor hockey in a town called Surrey (just outside of Vancouver). I played 4 years of Jr. "A" hockey in the British Columbia Junior Hockey League. I then had a tryout in the Atlantic Coast Hockey League, I was let go after the first two games. So I then decided to return to Australia.

- What were your first impressions about Australian hockey ?

I had no idea what to expect when I first went to Australia. I was worried about making the team. But that wasn't a problem when I got there. The level and organization was nothing compared to Canada.

- Ice hockey has existed in Australia since almost one century. Could you describe the evolution of the game there ?

From what I have been told ice hockey was at its biggest in the 1970's.

Ice hockey is not the most organized sport in Australia, but not the worst. I am guessing that there is about 3000 registered players today in Australia. There is about 20 ice rinks in the country.

I think the level of hockey in 1982 when I first went was about the same as it is now. I am talking about the senior level. The biggest change I have noticed since coming to Australia is that players now start to play at a younger age. When I first came, not many young people played, they started to play in their early to late teens.

Ice hockey is a very small sport here, but the profile is starting to grow. We have a six-team national league (AIHL) which is getting better every year. The average attendance for an AIHL game is only about 200-300, in Adelaide we average about 500 and our rink does not hold much more. That may be the same with all the rinks in Australia.

- What have been your motivations during all these years in Australian national team ?

One of the main reasons that I stayed in Australia was the chance to play for Australia. It was a lot easier to get residency back then. The chance to play against other national teams was a great opportunity.

My motivation to keep playing for Australia is to be able to play at the highest level possible. To get the chance to play against some European and old Soviet countries is a big thrill.

- Which is the strongest country you played against ?

In 1989 we played against Holland and Yugoslavia before the break up of that country, these were two very good teams. Great Britain in 1992 was very strong. In 1993 we played Kazakhstan and Slovenia who were very good. In 2002 we played Estonia who was good. I think Kazakhstan in 93' would have been the best. Just the chance to play against these teams was a great memory.

- What has been the greatest moment of your career ?

Winning the bronze medal at the C Pool championships in 1992 is my best moment for Australia. We were not expected to do very well and we beat Hungary 8-1 and Belgium 6-2 that year.

One of my jerseys is in the Hockey Hall of Fame in Toronto, which was also a big thing for me. When the IIHF had its 90th anniversary, each country was asked for a jersey for the new international part of the Hall of Fame, Our federation chose mine to go in.

I have been told by one of the IIHF statisticians that I have captained the most world championship tournaments (12) of any player. 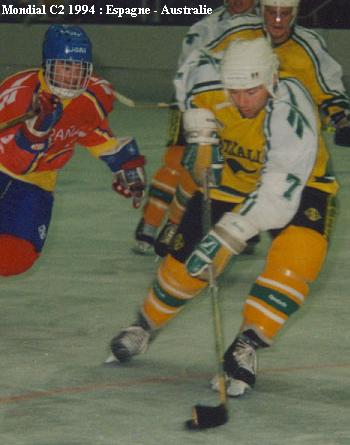 - Were you surprised by the promotion of Belgium into World Championships Division I ?

I was not surprised when Belgium moved up to Div I. Belgium are a very good team when they get all their top players. We have had some good games with them over the years. They seem to play some of the better games against us.

- What do you think of Jari Grönstrand, appointed last year to coach Australian national team ?

I think Jari was a fine coach. It is hard to comment on his coaching as he only had the team for ten days. He was not given much to work with, we had a very weak team with many good players not able to attend for various reasons. This is one our biggest problems : getting our best players to play. Because of the cost a lot of good players don't go every year. I think Jari was expecting Australian hockey to be a bit better. From what I have been told he won't be back next as our coach. I think he deserves another year, as he now knows more about the players and talent we have, and also about the teams we play against.

- Australian national team has always relied a lot on players raised in North America or in Europe. Where would a team of Australian-born and trained players rank in the world hierarchy ?

Yes, we have had many Canadian and European players on the national team over the years. But not as many the last few years. Without these players I think the national team would have a hard time staying in Div II.

- When will Australia be ready to do without players who got their hockey education abroad ?

I think it will be a long time before we could produce a team of all Australian trained players. We just don't have enough good young players coming up the ranks. An Australian player can only reach a certain potential in this country, they must go over-seas to get better. We are getting more young players going over-seas every year now, I would say we have maybe 10 juniors playing over-seas mostly in Canada.

- World Championships Pool C 1989 in Sydney attracted good crowds. Why hasn't any similar competition been organized in Australia since then ?

That was my first world championship, and I think it was the best attended tournament I have played in. The people came out to all the games, not just the games that we played in. In all the tournaments I have been to, the people only come to watch the home team, and sometimes not even them.

I think we have not hosted because it is very expensive to host this kind of event in Australia. The funding from IIHF to host would not cover all the cost and being such a small sport we have a hard time getting government funding.

We have been told by our federation for the past three years that they were going to bid to host the championships, but then they tell us next year... Who knows.

- What is the main obstacle to the development of Australian ice hockey ?

I think the biggest thing holding Australian ice hockey back is the lack of rinks and the cost of playing.

Back to the interviews